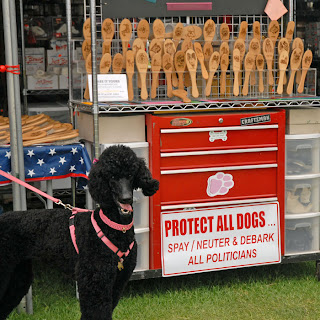 The term Social refers to the characteristic of living organisms to interact with other organisms and to their collective co-existence. The word compassion, derived from Latin, means to suffer together with. Together they make up a nice touchy-feely phrase, "Social Compassion", selected as an oxymoronic title  for a group that promotes spay-neuter.

Does the concept of "Social Compassion" really jive with spay-neuter? We've seen plenty of documentation lately that spay and neuter causes some pretty nasty health problems. And, in all areas where mandatory sterilization has been enacted, shelter intakes and deaths inevitably increase. So indeed, perhaps there actually is a whole lotta suffering....er, compassion....going on. And it's epidemic. It's suffering caused by our society. You might even call it a case of Social Compassion.

Here are the figures from the LAAS website, just plucked them from there this morning:

An increase of 38% in shelter killing!!

When will they ever learn? This is the quintessential example of what happens when Big Brother tries to bully John Q. Public into having unnecessary sterilization surgery performed on his pet.

Killing pets is certainly a far cry from the concept of "compassion". Plus, there won't be any collective co-existence (The "social" part of the equation) if pets are sterilized to extinction.
If there is widespread sterilization, along with bans of pet store sales and onerous breeding restrictions, then pets will necessarily be supplied from other countries, where such draconian regulations are nonexistent. How is that better than having healthy, intact pets that are bred here by known entities?

Why are pets in shelters? Certainly not due to any supposed "overpopulation". The top reasons given for pet relinquishment are moving, landlord issues, behavior problems etc. And more than half the animals in shelters did not have owners in the first place; feral cats, for instance.


However, shelter numbers have plummeted dramatically since the 1970s because we have been using methods that WORK....public education related to responsible ownership, low-cost voluntary spay/neuter clinics, and support for rescues and adoption events. Shelter numbers have plummeted in California by 86%....These programs have worked very very well. So well, that we currently have a less than 1% euthanasia rate per human population in the state of California.

We have attained a no kill success! The vast majority of pets..... 75% of all owned dogs and 86% of all owned cats... are ALREADY spayed or neutered. The only way to reduce shelter numbers further is to outlaw pet ownership completely. And BINGO, that's exactly what the animal rights kooks have planned for us next. They will pass laws making pet ownership so expensive that ownership of a pet will just become just an unattainable dream for most people.

But animal rights groups have been conspiring for decades to push their agenda of a petless society. "Social Compassion", a California "non-profit" group, was recently founded by Judy Mancuso, her husband Rolf Wicklund, Jane Garrison and her husband Mark. News flash, these people are PETA operatives. Jane Garrison, who was employed by PETA for at least six years, believes that animal use equates to abuse. PETA, under the auspices of their central headquarters in Virginia, has a pet "rescue" for their area that kills upwards of 90% of the animals that they take in each and every year. Who are these PETAns to lecture the rest of us on "compassion"? How dare they!

Social Compassion happily accepted PETA's sponsorship and money to push its mandatory spay-neuter bill in California, CA AB 1634. And, why shouldn't they? Spay-neuter laws kill pets, just like PETA does. Thankfully, that bill and it's succesor CA SB 250, both died their well-deserved death.

But now, "Social Compassion" has it's next project in progress in the relentless propaganda campaign for pet sterilization; a license plate program they are promoting here in the state.

Here's the update on the latest promotions of this license plate propaganda scheme from "Social Compassion":


When we hit 7,500 pre-orders to make the plate official, the organization with the most plate orders to its credit will receive a $7,500 donation courtesy of our friends at Found Animals Foundation! 2nd place will receive $5,000 and 3rd place will receive $2,500.
Every new plate buyer is automatically entered into a drawing. For every 100 new orders received after March 1st, 2011 one person will be selected to have a $300 donation made in their name to the shelter or animal non-profit of their choice. So, shelters and non-profits have another way to earn! The process is easy and fun, and we'll provide all the materials you need.

Actually providing cash prizes to promote fraud, lies, and deaths in shelters! Please, buy our license plate and send us money so we can campaign hard for programs that cause MORE DOGS TO DIE! Thankfully, this license plate project is far short of the implementation goal of 7500 orders needed by July. Let's hope these license plates will never be seen on the back end of any car in California!

Get some REAL "social compassion"....contrary to the stated goal of the "Social Compassion" group, it is virtually impossible to "reduce the number of abandoned and euthanized animals through spay and neuter programs"...particularly when such programs are mandated by law. In fact, requiring spay-neuter makes shelter situations worse.

But then, it's not about the animals, is it? Ed Boks testified to that fact in state hearings.

Mandatory sterilization is not about pets, it is about total government intrusion and control of every aspect of our lives!

Perhaps that's the reason that most people in Europe do not sterilize their pets. In Norway, it is actually ILLEGAL to spay or neuter your pet unless it is a medical necessity.

Guard them under your tender, loving care....and keep them INTACT if you so choose!
Posted by Liberty Belle at 4:33 PM