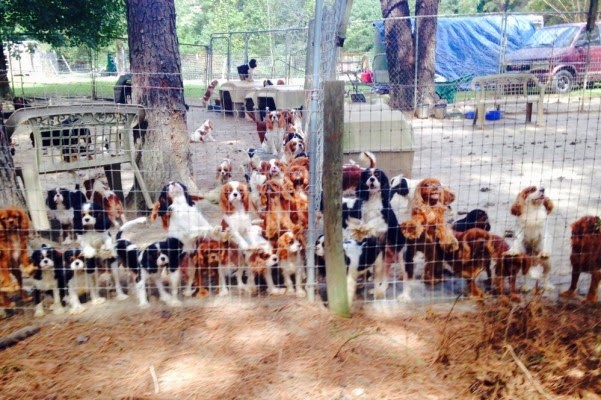 How would you like to own the beautiful dogs pictured above? Friendly, healthy, happy, well-groomed, tail-wagging purebred Cavalier King Charles Spaniels. RAISING MY HAND here! I'd like to have ALL of them.

The owner, a USDA licensed breeder, has obviously taken very good care of them. And apparently just got paid off, BIG TIME!

Several "Rescue" groups heard that these dogs would be made available by the owner at public auction. One rescue group actually set up a "Go Fund Me" page for the purpose of bidding on the dogs. In less than two weeks, this one rescue group raised......are you ready for this?......over $183,000!

I'm not sure how many dogs this one particular group bought for the purpose of reselling at retail, but if they bought all 108 of the dogs mentioned in the article, they would immediately have available about $1700 to spend on each and every dog! I'm sure the original owner is laughing all the way to the bank, for getting a big price for these retired breeding dogs.

Not to mention, the "rescue" will be SELLING them soon to the public. Probably for several hundred dollars apiece.


That's ends up netting them over $2000 per dog. Pay for a dental, a quick-snip castration, and WALA! A fast and easy profit.

Dog breeders don't have bleeding heart donations from fraudulent "Go Fund Me" pages to help them pay their mortgages and veterinary expenses.

Dog breeders must pay for a Federal license. They have to be inspected. They are required to provide proper care and treatment of their dogs, BY LAW. They have to pay a LOT of money to keep their premises in acceptable conditions, to provide regular veterinary care, to pay for permits and fees. They have people watching to make sure that drinking water is fresh, that any medications used are in date, that accommodations are roomy enough.

"Rescues", who in cases like this are really nothing but Retail Rescue pond scum, have NO REGULATION. No care standards, nobody watching to make sure they take good care of their charges. And indeed, we have seen MANY rescues in recent years busted for animal neglect and cruelty.

Any other pet dealer has to be licensed by USDA, but apparently not if you are a self-proclaimed "rescue".

Yet, in the eyes of the public,dog breeders are the "greeders", the bad guys! Dog breeders want to

I ask you, how else can one pay for dog food?

But that doesn't stop people from justifying this insane action. Why, they are saving these dogs from a fate worse than death! Being used for BREEDING!  The awful original owner had 100 dogs and was a PUPPY MILL!!

And they are putting this horrible, dog-abusing "miller" out of business.....how? By paying him big bucks for his dogs?

Maybe he can retire...or maybe, he can take that money and go out and buy a whole bunch of new dogs to continue his breeding program.

Good for him! Take the money, because you sure ain't gettin' no respect. Hey, maybe you can get the rescue groups to buy dogs from you again! A lot more profitable than breeding, and easier, too.

The donations for the PET STORE DEALER oops, sorry, I mean "Rescue", continue to stream in from John Q. Public. I guess Obamacare's "architect" Gruber was right after all when he said people are stupid. You can check here to see how much money to date the "rescue" group has raised from all the bleeding heart dummies out there. Maybe it'll be up to a $$ quarter million $$ in another week or so.

That'll buy a whole lotta halo polish.
﻿﻿﻿﻿ News flash..... had to update this as I find out more. There was actually raised a total amount of over ﻿﻿$350,000 to buy these hundred dogs! Sucker born every minute!﻿

Can I keep My USDA Exemption?

Question: If I have only two females, can I ship and still keep my exemption? After all the discussion we've had about the new rule, I don't remember.


Answer: Yes, probably, since according to the amended Regulations, you can have up to four "breeding females" and ship "sight unseen" as pets. However, several issues come to mind that may not make this an easy question to answer:


2. You are aware, aren't you? that APHIS definition of "breeding females" probably would include intact bitches that you wouldn't wouldn't consider breeding? (e.g., too old, too young, health problems etc.) -- you may not breed them but APHIS might still count them in the total if they believe them "breedable".

3. Do you participate in Rescue activities, and have you housed rescue "breeding females" (intact bitches)? From what I'm hearing, APHIS has for the present time chosen to look the other way on this issue, and not count rescue animals in the totals. However, by a strict interpretation of the Regulations, intact "rescue" females would count (especially if you transfer any dog "sight unseen" to a pet home), no matter how APHIS is viewing them now.


4. Are all animals shipped by you as pets offspring of the pets you own, and born and raised on your property? It's questionable how APHIS would view a "sight unseen" sale of a "stud fee puppy", for example since to obtain the "four or fewer" exemption, any pet you sell must have been "born and raised" on your property according to the Regulations.. This is not one of the changes made in 2013 to the Regulations, but was there all along, but wasn't generally enforced, at least for small home hobby breeders such as yourself. How or if it will be enforced now is a good question. (This is yet another thorny rescue question as well).


5. Do you own other "breeding females" that are included in the Regulations? (small pet mammals, primarily). Does anyone else in your household or who resides on your property have any "breeding females" (dogs or otherwise.) All those get counted in the total of "four or fewer."


You may want to get clarification on your situation from APHIS directly. Unfortunately, what an APHIS representative tells you now may or may not be admissible in Court if it conflicts with what's in the Regulations.


Finally, remember (especially if you openly ship to people you don't know well, or if you advertise that you ship) that you are a potential target for the ARs, and they might try to have you investigated. If APHIS comes to ask as to your mode of business, you will need to have proof that -- throughout the year that you shipped those animals -- that you only had two "breeding females" (and not more than four) and that you complied with other requirements of the Regulations needed for the "four or fewer" exemption.


If you choose to go the easier route, and decide to have no "sight unseen" sales, you can, of course, have as many "breeding females" as you wish if you sell to the final purchaser (and not wholesale should you own more than four breeding females). But it would still be a good idea to document how these animals were transferred to the new owner so that they weren't a "sight unseen" sale.


AWA and AWA Regulations can be found here, and here.
Submitted by Margo Milde via the Pet Law list.

Margo is long-time Legislative Liaison for five dog clubs: Rand Park Dog Training Club, Agility Ability Club of Illinois, Fox River Field Spaniel Club, Moraine Tracking Club, and Field Spaniel Society of America (AKC parent club). She is also a Board Member of the Illinois Federation of Dog Clubs and Owners. However, her answer here may not officially represent the position of these organizations. 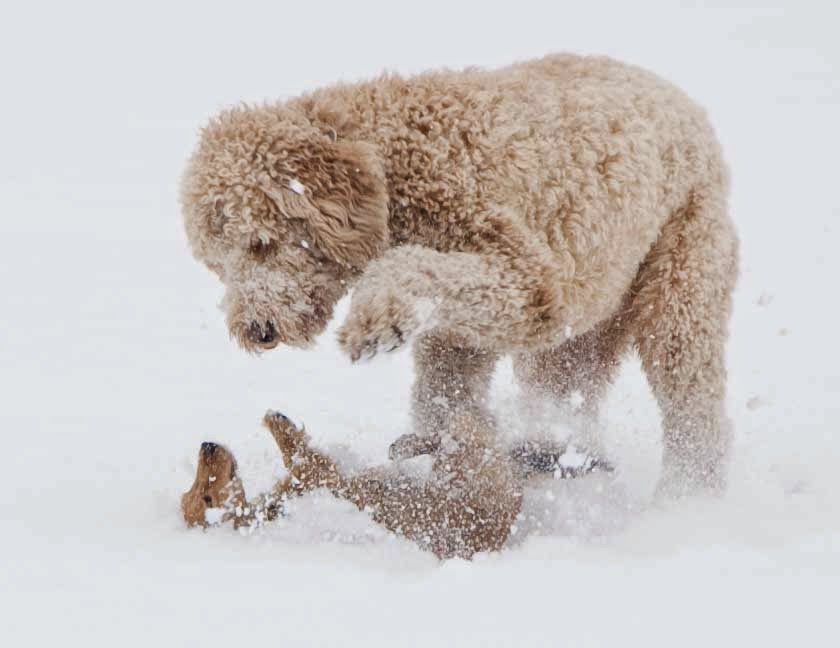 Posted by Liberty Belle at 9:25 AM No comments: