No kidding! What do Chihuahuas and "pit bulls" have in common? They are both now in the crosshairs of the new MSN ordinance in the City of Hollister, California.

Update from the Save Our Dogs website, posted here with permission of the author.

"There was a great turnout for last night’s Hollister city council meeting about the mandatory spay-neuter ordinance. The room was packed with more residents than the council had ever seen before on any issue."

"Thank you to Mayor Gomez and Vice Mayor Valdivia for voting no."

http://saveourdogs.net/2010/10/16/hollister-mandatory-spay-neuter-ordinance/
Posted by Liberty Belle at 6:48 PM No comments:

Language and Our Messy World

Many people have observed that there is a difference in world view between those of us who breed and raise animals and people at the other end of the spectrum. That would be people who would like to see an end to pet ownership, otherwise known as animal rightists. There may be some confused people in the middle. There may even be some dog breeders who espouse some animal rights philosophy without knowing it. Those are often the people shouting loudest about how awful puppy mills are or pointing fingers at their dog show enemies and calling them puppy millers.

You can often tell just where someone stands on this spectrum by how comfortable they are discussing certain things and by their use of language. For instance, when you hear or read animal rights people talking about animals you may be confused and think they are talking about babies or children. “I took Betsy to the doctor for x-rays and she was so good! She had her temperature taken and the doctor felt her all over. She never moved at all during the x-rays. The doc wants us to come back next week.” I have no idea if Betsy is a dog or a child. When my dogs go to the vet they lick shoes, wriggle, get petted and, if they are good, they get treats. Sometimes they eat things they shouldn’t or throw up. In short, they do dog things. Sometimes I have to apologize for them — a lot. But they are always dogs and everyone who meets them knows they are dogs and not children.

If you ever try to have a conversation with an AR person about a subject like, oh, dog breeding, it can be anywhere from frustrating to amusing. First of all, there is the word. The “B” word. Bitch. There, I said it. Breeders say this word 100 times a day. Having a bitch in your home is a fact of life and there’s nothing pejorative about the word. I have four bitches right now. They are all related and they get along very well. They get along the same way that you would expect any four related girls/women to get along. They have “words” sometimes. One may be cranky occasionally. The two youngest play. The older ones pull rank. They have relationships. But they are all intact bitches. Big deal.

Just the fact that I have four intact bitches is probably enough to set off some AR people. Most AR people prefer their female dogs to be “sterile.” What an awful word. If you consider the language you find in legislative bills and local ordinances, it invariably refers to bitches as “adult female dogs.” And it often calls for them to be sterile — unable to reproduce, which, of course, is the antithesis of what a breeder strives to do. So, let’s just say that AR people have a hard time with the bitch word. They won’t or can’t use it in normal conversation. If you insist on having a conversation with an AR person about breeding they will usually talk about the “poor breeding dogs” or the “girls” or “the mothers” or start using other soppy language for bitches which will take you far, far away from whatever it is you are actually discussing. Yes, it is hard to have a reality-based discussion with an AR person about dog breeding. This is largely because they have been brainwashed into thinking that all dog breeding is somehow harmful to dogs. It doesn’t matter that you spend every waking moment with your dog up to and during whelping, waiting on her hand and foot, tempting her with any kind of food you can get her to eat and doing everything in your power to make her happy. It doesn’t matter that you devote yourself to raising and socializing the puppies from the moment they are born. In the eyes of an AR person, you are a dog breeder and that makes you evil incarnate. You have to be breeding your dog for money and you cannot possibly love your dog the way they love their dog, even if these ideas are pure science fiction.

If ARs have problems with the concept of dog breeding then you can imagine how uncomfortable they are with the nuts and bolts, so to speak, of the act. Good luck if you are ever in the position of trying to describe breeding or whelping to someone with such exquisite sensibilities. Of course, it’s not just animal rights people who have problems with imagining their dog getting pregnant or having puppies. There are plenty of web sites online where pet owners ask questions about canine pregnancy. I suppose we should be happy that spaying and neutering have been so successful in this country that most people don’t seem to have any idea what happens during a dog mating or during whelping, but it’s too bad that more people don’t understand some basic biology about their pet dogs. Unfortunately, this has led to animal rights people spreading all kinds of inaccurate information about breeding and whelping.

For instance, most people now believe that dogs need to be spayed and neutered as young as eight weeks old, or by the time they are four months old. Hold everything! Spaying and neutering at such a young age is actually BAD for your puppy’s longterm health! It’s extremely rare for any dog to be sexually mature at this age. It’s much better for your puppy to wait until later to spay or neuter, even if you never intend to breed him or her.

Spaying and neutering is a good choice for many pet owners, but it should remain a choice. It should never be government-mandated. There are many things to consider before spaying or neutering your dog such as your dog’s overall health, age, sex, breed and so on. It is an individual decision between you and your veterinarian. Do some research before automatically deciding to spay or neuter your pet. It may be the right decision for you and your pet, but make sure. Don’t be a lemming.

Animal rights people have also leapt to some ridiculous conclusions out of possibly good intentions. For instance, we can all probably agree that dog fighting is a bad thing. But when it comes to the so-called “rape stands,” animal rights people are way off base. This is another case where they have misused language, in this case for propaganda reasons. There are no such things as “rape stands.” There are breeding stands to facilitate breeding. Anyone who actually knows anything about dogs knows that dogs don’t get bred by rape. This is a ridiculous anthropomorphism. Bitches have a heat cycle and when their hormones tell them they are ready to breed, they breed. They will not accept a male dog until they are ready. If a male tries to breed before it’s time a bitch is likely to bite his face off. Not only will a bitch not accept a mate until it’s time, but she is not fertile until she is ready to accept a mate. As any breeder knows, if a bitch won’t accept a male, it means she’s not ready to breed. So, rape would be pointless and would not result in any puppies. A breeder would be stupid to do anything to encourage a male to breed before the bitch was ready and willing. Breeding stands (not “rape stands”) are used to give the bitch physical support when the male leans on her. Some male dogs also need ramps in some cases, if the female is taller, and so on. These things are done to help the dogs, not because one or either partner is unwilling. Many breeders also offer physical support themselves during the breeding, holding up the dogs by placing an arm around their stomachs, etc. This is all part of being a breeder.

Unfortunately, too many times animal rights people make statements about dog breeding when they don’t understand what they’re talking about and don’t have any first-hand experience with the subject.

Many animal rights people seem to have a problem when it comes to contemplating bodily functions related to animals. They don’t seem to enjoy too much reality or being very close to nature. Consider, for example, this statement from the chairwoman of Chattanooga, Tennessee’s food and agriculture action team, when asked a question about city residents keeping chickens on their premises: “'What carries disease more than chicken poo is cat and doggy poo,' Mayo said." Poo? Chicken poo? Cat and doggy poo? Is that any way for an adult to discuss excrement? Especially when that person is supposed to be in a position of authority over chickens for city residents? Wouldn’t it be preferable to have someone in that position who could talk about chicken manure without sounding like an 8-year-old child?

I think it’s fair to ask ourselves if we have all become so distanced from animals that we have to resort to such childish language when speaking about barnyard animals and pets, or is it only people who prefer to have their animals in Disney form — without bodily functions, without genitalia, who don’t reproduce, and who only die when there is an orchestra standing by to play sad music. I think there are still plenty of people, especially those of us who breed animals, who are very familiar with animals in their true form. And we prefer to use language that really describes them as they are instead of euphemisms or words that make them seem like children. We love animals, too. And we love them as they truly are. Not in some make believe, fantasy form.

So, here’s to using the proper words for things. For describing our animals as they really are instead of pretending they’re babies or children. For calling “poo” manure. For telling my girls they’re bitches and appreciating them. And for celebrating heat cycles and all of the bodily functions that make the animal rights people so squeamish. This is a messy world and that’s a lot better than the sterile world the ARs would like us to have.
Posted by eshever at 2:33 PM No comments:

Now you understand the difference between Animal Welfare Advocates & the Humane Society of the US. 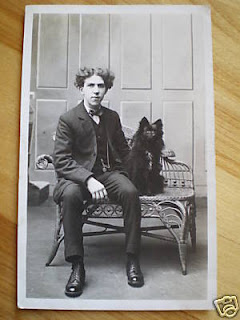