The Neuter Nannies are at it again. Santa Paula is the next city in California poised to mandate that owners and their veterinarians inflict unnecessary and harmful surgery on pets in the community. Up on the agenda for the next city council meeting is a delayed vote on a mandatory spay-neuter-microchip ordinance.

At the hearing two days ago, not just one but TWO local veterinarians (they are the experts, right?) testified against mandated neutering of pets. Despite the evidence presented that spay/neuter has adverse effects on health, the city plans to amend and pass their proposal. As long as they toss a few “exemptions” into the pot to remove some objections, they have no qualms about squelching the right of an owner in consultation with his veterinarian to decide what is best for his dog's health.


The local shelter, “Santa Paula Animal Rescue Center” boasts of being the nation's first open-admission no-kill shelter. According to the claim on their Facebook page, 99% of the animals who enter their shelter, LIVE. Yet representatives from this group are still not satisfied. Like most animal rights fanatics, they want to spay-neuter pets into oblivion. The SPARC is backing the new ordinance and their representatives spoke in favor of it at Monday night's City Council meeting.

The rescue brigade will continue to cry “overpopulation” until there is not one single animal entering a shelter, anyplace. I hate to break the news to everybody, but that can only happen when there are no more pets left PERIOD.

And this group also had the temerity to contradict the testimony of the two local veterinarians, who were concerned about the adverse health effects of spay and neuter. Here's a quote from a local newspaper article:

Representatives from the Santa Paula Animal Rescue Center, meanwhile, urged council to approve the ordinance. Health problems, such as musculoskeletal injuries and cancers, occur in many animals whether they are spayed and neutered or not, they said.

Brilliant! Whoever was quoted here probably has his GED. I'm sure he knows better than two local veterinarians about the health effects of spay-neuter.

This person is so ignorant that he can't discern the difference between INJURIES and DEVELOPMENTAL problems resulting from lack of hormones. He is unaware of (or just plain doesn't care about) the many, many studies in multiple breeds that prove that cancer risks are many times higher for spayed/neutered animals than those who are intact. And, he isn't going to be paying the veterinary bills for the owners whose dogs become lame, hypothyroid, or aflicted with bone cancer or hemangiosarcoma. When the dog becomes more aggressive towards humans (as studies have found to be the effect of spay/neuter) will he be able to rehome the dog or will it have to be killed?


Mayor Martin Hernandez said he supported the ordinance, noting that those speaking against it were not from Santa Paula. He said requiring animals to be fixed is good for the community, and regulations are necessary."If laws were for the responsible people we wouldn't have people getting DUI's daily," he said. "Do you think that people are tending to their animals more than they take responsibility for driving under the influence of alcohol? I don't think so."

Well, that settles the debate, then. Ignore your two local veterinarians and the reams of knowledgable dog people from the Ventura County-based Kennel Clubs, who will have to deal with your stupid ordinance. Or maybe, their dog breeders could simply refuse to sell puppies to anyone who lives in Santa Paula. There's a great benefit for your community. No pets.

Good for the community? In which universe, exactly? Where is the evidence? Mandatory spay-neuter has NEVER been proven beneficial to ANY community where it has been enacted. In fact, licensing and rabies vaccination compliance DECREASES. Shelter intakes INCREASE. And FEWER dogs are reclaimed from shelters! Low-income people and seniors will be disproportionately hit with the higher costs. It's expensive to have the unnecessary surgery done, and even more costly when the dog gets cancer and dies an early, expensive death.

And “tending to their animals” is equated with foisting unnecessary, life-sucking surgery on them? How stupid is that? Well, we can't expect genius from someone who draws a parallel between animal ownership and drinking alcohol.

As if all this wasn't ridiculous enough, the ordinance also requires the Animal Services Coordinator, who more than likely has ZERO expertise in dog breeding, to administer a written test on humane breeding practices. If you fail the written test, no breeding permit for you.

Microchips are fine but they can rarely travel in the body, and the insertion process is not without risk. Again, the owner should have the right to decide if he wants to use a chip or if he prefers a collar with tag or a tattoo for ID purposes.

Santa Paula, the latest in the string of Neuter Nanny cities here in our state.

It's been encouraging to note so much recent shelter success and so many areas where “No Kill” status has been achieved in recent years. Maddie's Fund believes that the entire country can easily achieve No Kill status NOW.*

We have more households owning dogs than ever before, fewer shelter deaths than any time in history, and more people looking to welcome dogs into their homes and treat them as valued clan members.

Hooray, right? Well, maybe not so much.

I've blogged at great length here about the shortage of adoptable dogs and how many shelters and rescues have turned to the importation of dogs from other countries to fill the void.

Despite shelter shortages, despite the importation of hundred of thousands of dogs from outside the US each and every year, despite people who want to adopt puppies being unable to easily find any, today I sit here and feel horribly pessimistic about the future of pets in America.

The general public has been brainwashed over at least four decades to believe that dog breeding is a nefarious activity. Breeding in order to have puppies, maybe even to have some puppies to sell, is an Extremely Politically Incorrect Activity.

The general zeitgeist in this country is a perverse and strong opposition to dog breeding and selling. In fact, if you tell most people you want to breed your dog, he or she will look at you like you have two heads. Planning a litter must surely be some sort of evil plot to produce animals destined for torture and abuse. In fact, some believe that a bitch having a litter is abuse in and of itself.

We continue to see strong forces at work who wish to ban breeding, who insist that there be laws to require sterilization of all pets.

This seems contradictory, because It's clear there is a demand for dogs that grows stronger every day. Where will the dogs of the future come from? Who will fill the market for family pets?

I read a blog named “Out The Front Door” which is No Kill-focused. In a recent post, the author openly admits that a shelter dog shortage is coming. He (or she?) rejoices at the coming shortage of shelter dogs. However, he is worried. Very worried.

People who want dogs might decide to...hold on to your hat.....BUY one from a breeder. Good heavens! We can't have that! Why, OTFD hopes that we will continue to import street dogs from other countries, and even step up the numbers of street dogs brought into the US.

OTFD prays that breeders in America will go the way of the dinosaur.

OTFD and indeed, many many of those involved in shelter and/or rescue would rather force you to get your next dog from the streets of a third world country rather than buy a happy, healthy dog purposely bred by a breeder right here in the USA.

Never mind the risk of RABIES which is still rampant in other countries. Never mind that these street dogs, seemingly destined to be your only option in the pet stores of the future, are bred under unknown welfare conditions and the absence of any standards. Never mind that our own American breeders have good health and temperament uppermost on their priority list and are ready, willing and able to supply the market.

Nope, OTFD and others like them don't care about any of that one whit. They just want you to stop.

I ask you, is this not the quintessence of cognitive dissonance?

What sort of dog lover doesn't like puppies to be born? There can only be one conclusion when this mindset has become so prevalent. These shelter and rescue folks don't actually like dogs. In point of fact, much like Wayne Pacelle, the President of the Humane Society of the US, they would prefer that another dog or cat would never, ever be born!

The rescue brigade love dogs so much that they hope they will all be sterilized and that no one on the planet will ever breed them. Ever. That's their real goal! Pet extinction. They would rather no dogs exist than man breed them.

The mind boggles. I hope the day never arrives when the animal rights fanatics succeed in removing dogs from our lives completely. 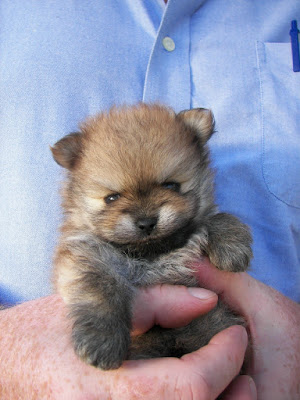