This morning I caught a glimpse of a show on "Super Soul Sunday" about Large Guardian Dogs. The show featured a family of Great Pyrenees dogs.. The older dogs were socializing the pups and introducing them to the flock. They were becoming bonded with the sheep and the lambs, even helping groom the lambs. The farmer remarked: " I watch them care for something outside of themselves and that purposefulness creates contentment."
This is something that farmers know, and people who are deeply connected to their animals know, but animal rights fanatics can never truly understand. Animals, just like people, need direction and purpose in their lives to be happy and content, whether it be having a job to do, a family to raise or a protective role of some sort.
I can't imagine a world where we divorce ourselves from our domestic animals. Such a world would provide only a sadly soulless existence for humans. For the animals we are bonded with in spirit, it would spell extinction.
Domestic animals exist only because of the purposes for which they serve mankind. Companionship is one purpose, but there are more practical associations such as horses who pull carriages or allow ranchers to traverse their territory, or cows and chickens who provide a major source of high-quality nourishment for humans in the way of dairy products, eggs, and yes, meat. Without the express purpose of helping us with our work or providing us with a food source, these animals wouldn't exist at all.
Man was only able to develop his brain and evolve to a high level of mental capacity through his consumption of high-quality protein and high-fat animal-based foods beginning thousands of years ago.
More rural and agrarian human societies have always understood this animal bond and been thankful for it. It's only in recent times, where our largely urban populace seldom thinks about nature and our connection to it, that we have seen people object to "using" domestic animals and insisting that animals have "rights". If so, humans have the same rights, including the right to produce and eat the foods our bodies need to thrive through humane stewardship of animals. 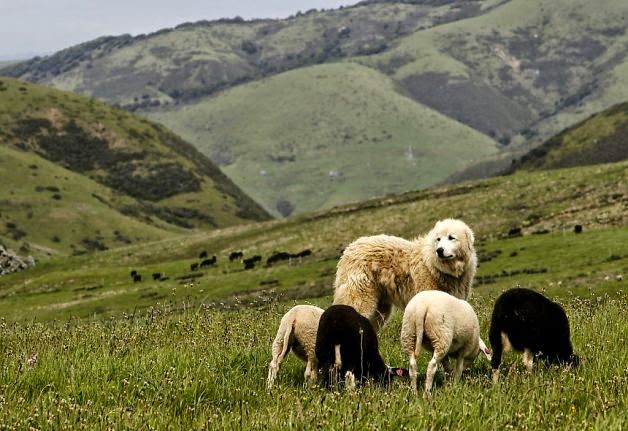 From an AKC press release:
AKC has joined with the AVMA, the Cat Fanciers’ Association, and the Animal Health Institute to establish the Animal Law Writing Contest for Law Students .

The contest is part of a shared effort by concerned mainstream animal welfare groups to ensure access and familiarity with a broad range of perspectives on animal law. The contest launches this month and welcomes all scholarly viewpoints.

Students currently enrolled at ABA-accredited law schools located in the United States are invited to write a 10-20 page scholarly paper on the constitutionality of one of two preselected animal law topics. A committee with relevant experience will judge all properly-submitted entries received by Noon on February 15, 2015 . The winner, who will be notified by April 1, 2015 , will receive a $2,500 cash prize and a trip to the American Veterinary Medical Law Association’s Annual Meeting in Boston, Massachusetts, next July. The second place author will receive a $1,000 cash prize.

What the heck? Why do all these animal groups want to encourage MORE animal laws and lawyers to deal with them? What am I missing here, are we playing right into the hands of the ARs? Somehow I doubt these folks are taught how to exercise conservative restraint in the legal arena.

I received some opinions that "moderate voices" in law schools should be encouraged, and indeed, if by hinting at constitutionality of these new laws they are seeking a conservative viewpoint to win this contest, that would be great. But how many "animal law" students out there are actually conservative instead of progressive?

Thoughts from one well-educated person:
This upsets me so much. Guess where most of the submissions will come from.....Lewis & Clark Law School or Tufts? Or how about these suggestions from the ALDF:


http://aldf.org/resources/law-professional-law-student-resources/law-students-saldf-chapters/where-should-you-go-to-law-school/
There is no possible upside for the AKC or people in the dog fancy from this contest. All it will do is provide arguments for A/R advocates. I can see it now....."This argument was supported by the winning paper in the AKC Animal Law Writing Contest."

This contest is yet another boneheaded idea from the AKC. (And the selection of topics was boneheaded, too.) What if the only submissions are from A/R-influenced lawyers-in-the-making who find "support" for the ban in Chicago or MSN in LA?

And here's why I think an AR-only outcome is highly likely . . .

The largest percentage of law school students want to end up in firms or businesses -- no one enters law school burning to fight against AR tide. Animal law probably won’t add to those students’ resumes. (Hey, I went to professional school in the ancient past (Northwestern, MBA, ’85), and I would never have written an extra-curricular paper or undertaken an internship in the non-profit sector. Why would an MBA student serious about working in the corporate sector divert his attention from the brass ring?) Why would a lawyer-in-the-making divert his attention from getting a job at the end of three years, especially to enter a contest with a modest payout and regarding a sector of the law with no active, high-profile suits.

Those students really interested in animal law are ideologues interested in working for advocacy organizations, like the HSUS, ASPCA, PeTA, ALDF, prosecutors’ offices and others further down the food chain. A great paper could get these students a job and “stick it to those animal abusers” at the same time.

When I hear commenters holding out for the pipe dream of moderation, I really become concerned. Where does moderation fit into this contest? This isn't a discussion. Writers will bring their positions to the table through the strength of their citations and analyses. Will there be a killer argument presented? Probably not. (The constitutional analyses will probably focus on "reserved powers,""illegal taking," and possible "interstate commerce.") But I can hear it now from the city attorney of LA or Pasadena or Long Beach, "The analysis posed by the winner of the AKC Animal Law Writing Contest completely supports our position." Note the use of AKC in the previous sentence.

In summary, I believe that this contest will only provide a forum for AR advocates and will ultimately hinder those of us in the field actually fighting MSN and various seller bans.

An experienced lawyer expressed his opinion:

As an attorney who has practiced law for over 50 years; who once was a law student; and who has devoted over 23,000 hours to studying and documenting the “brainwashing” efforts of the HSUS and Mr. Pacelle - - (who described his book, The Bond, as “part memoir, part manifesto”) - I have grave, grave, grave concerns that the contest will ultimately lead to unexpected, irreversible and devastating consequences because Mr. Pacelle and the HSUS have expended over ONE BILLION DOLLARS in their unrelenting efforts to “brainwash” all segments of our American society. That includes, but is not limited to, the American public, news media, elected officials at all levels of government, government agencies, such as USDA (which hired Sarah L. Conant, a former HSUS ligitation attorney, who, when a law student at the University of Virginia Law School, organized a law school sanctioned animal law group), the Department of Justice, (which hired Ethan Eddy, a former HSUS litigation attorney who tutored Sarah L. Conant), law enforcement officials at all levels of government, our churches, and our pre-schools, elementary middle and high schools, and yes, the American Bar Association, and law schools!

MY TOP REASONS FOR CONCERN:
Let's hope that the winner is NOT a lackey of the HSUS, but that seems rather unlikely.
Posted by Liberty Belle at 2:58 PM 1 comment:

AKC: "Despite Poor Record, Mandatory Spay/Neuter Proposals on the Rise"

Posted on December 5, 2014 by americankennelclub


What do Pasadena, California; Augusta, Georgia; Madison, Wisconsin; New York City and the state of Rhode Island have in common?


Each of these places has recently advanced legislation to require that all dogs or certain classes of dogs within their jurisdictions be sterilized.
After what appeared to be several years of declining interest in mandatory spay neuter (MSN) policy by animal activists, AKC has observed resurgence in MSN proposals in the last several months, mostly at the local level.
MSN laws can take a variety of forms. They're regularly offered by activists as a quick fix for a myriad of canine issues ranging from dangerous dogs, to shelter intakes, to roaming pets, and even concerns about substandard kennels in other communities. Still, cities that have established MSN have not only found it to be ineffective; it has also created a host of new problems. For example, after Dallas, Texas, implemented MSN in 2008, the city experienced a 22% increase in animal control costs and an overall decrease in pet licensing compliance.  AKC Government Relation's Issue Analysis on Mandatory Spay Neuter presents more information on why MSN is ineffective.
Tragically, some activists push for mandatory sterilization laws even as mounting scientific evidence demonstrates that spay/neuter surgery (ovariohysterectomy and castration)— especially when performed on a young puppy—can have serious long-term negative health consequences. Recent scientific studies reveal that juvenile sterilization may lead to increased incidences of cancer (including osteosarcoma, hemangiosarcoma, lymphosarcoma and mast cell tumors), hip dysplasia, ligament disorders, chronic incontinence and even shortened lifespans. These and other emerging studies contradict commonly-held beliefs about the effects of spay/neuter.
Ironically, many animal rights activists who push for government-mandated sterilization for all dogs also adamantly seek to outlaw minor procedures such as tail docking or dew claw removal. It's not clear why some find it logical to ban these minor procedures, but don't question passing  laws to require major spay/neuter—in some cases only a few weeks after a pup has opened its eyes and learned to walk.
According to the American Pet Products Association, 83 percent of U.S. pet dogs are already spayed/neutered. In many communities, local rescues and shelters have so few adoptable dogs available that they are importing puppies and dogs from other communities and states to offer in their facilities. Ironically, many of these communities are the same ones that are considering MSN.
More here:
Posted by Liberty Belle at 1:25 PM 1 comment: