Why Animals Don't Have Rights

The phrase "animal rights" sounds pleasant enough on the surface. Kind-hearted people the world over love animals and wish to see them treated humanely. Abuse and neglect of owned animals is illegal in every state of the union. We as a society value and promote the welfare of animals.

However, upon close examination, we find that the concept of "animal rights" is invalid.

"Rights" is defined as "a just claim or title, whether legal, prescriptive, or moral".

What specific "rights" are animals entitled to claim, under a system of justice? This must be determined in order to discuss the situation intelligently.

Here is a listing of some commonly-accepted "rights":


We can't reasonably expect for animals to participate in free speech, or in a political system whereby they vote, or in the selection of a religion.

Rights are civil and political concepts. In order for animals to have rights, they must have an established system of government. They must have laws for which there is punishment for infractions, determined by a system of justice.

Animals don't have laws. The concept of justice does not exist for them. They don't live by a moral code.

In order for rights to exist, corresponding responsibilities must also exist. For instance, if one expects the right to vote, then one must abide by societal rules and laws that have been instituted in order to maintain that right. The right to liberty must be balanced with a respect for the rights of others. Animals do not have a respect for the rights of others, and therefore the liberty of wild animals is balanced only by the forces of nature such as predation and the food chain. Animals may have a concept of possession of property, but no reciprocal idea of theft being "wrong".

There are also social rights concepts such as sexual equality, racial equality, rights to education and to health care. These rights are agreed upon by the members of society as beneficial and just for the group. Animals have no understanding of or participation in abstract concepts like equal rights based on gender, race or age.

The concept of "animal rights" ignores the very nature of animals. Animals fight for territory or partners. They hunt, kill and eat each other. They rape, pillage and plunder at will. Humans have established official codes of conduct that prohibit such activities impinging on the "rights" of others. While the very nature of "humane" treatment prohibits any human-caused torture of animals, there is no such natural prohibition against torture in the animal world.

Animals are incapable of moralizing; and even if capable, should the lion be told that he may not eat the lamb? Should the very process of natural selection and evolution be altered in consideration of the "right" of prey to avoid being someone's dinner? Of course not.

Most people do, however, believe in the concept of humane stewardship toward animals. The very use of the word "humane" tells us that compassionate treatment of animals and each other is an ideal inherently related to human values, ethics and morals.

We believe that the animals we own should be treated with compassion and mercy. We believe that animals in the wild should be conserved from the effects of mankind that might serve to decimate their populations. This ideal of stewardship of animals (or animal welfare) is vastly different from the concept of animals having "rights".

Animal rights activists have waged a campaign to convince the public that animals ownership is akin to slavery; that breeding is no different than rape; that animals on farms are the moral equivalent of Nazi holocaust victims. Such comparisons are deeply offensive to anyone who cherishes genuinely "humane" ethics and values. 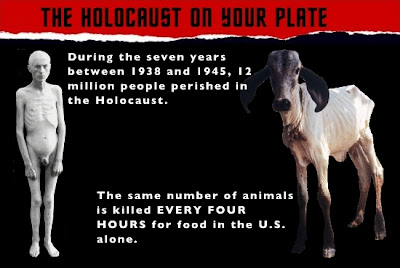 The idea that animals must be "free" from human use ignores our human biology. We are not herbivores, with multiple stomachs and lengthy intestines, who ruminate a grassy diet; we are omnivores who rely on some meat and animal products in our diet to maintain our health. We have evolved in this manner. We co-evolved with dogs, who hunted alongside us and helped us to herd our flocks, so that both our species could enjoy our natural diets.

Those who believe that the concept of "Animal Rights" is worthy of support may obtain self-satisfaction derived from a sense of moral superiority, but their logic and intelligence is certainly questionable.

Posted by Liberty Belle at 9:13 PM