Moral Preening in the UK

Having taken a hiatus from the crazy world of dog law, I had just about gotten my mental health and blood pressure under control when a friend forwarded me a link to a Pedigree Dog Defence Forum from the UK on Facebook. Apparently there’s a new law under consideration which would require puppy buyers see the parents of any pup they are considering. Why not, they were remarking. Sales in pet stores are disallowed, and this is the” responsible” way to go. After all, THEY are wonderful breeders who all follow this practice anyway.

SIGH this attitude  is nothing new to me. I hear these comments all the time from many show dog breeders here in the US.......Thinking their way is morally superior and a willingness to sell others down the river who disagree.

I USED to breed dogs. I don’t want strangers coming to my house. People have been robbed of their pups and even killed by lookie Loos posing as pet buyers. Not to mention Animal Rights kooks who harass, demean and threaten breeders especially if they know where you live.

Laws in our country are creeping incrementalism towards the elimination of breeding by any means. Pet store sales bans, then elimination of anyone “commercial” because of course they aren’t as saintly as those who lose money breeding dogs. Next, you classify the remaining breeders as “commercial” based on some arbitrary number like bitches owned or litters produced annually. Now the hobby breeder must comply with commercial breeder rules. Who in their right mind would remain a dog breeder, or even consider breeding in the first place, under such conditions? And so, we march down the path toward extinction. Extinction of breeders. Extinction of entire breeds. Extinction of dogs purposely bred to serve man. After all, these breeders believe that breeders should instead serve the dog and eliminate his role as our helpmates.

“Rescues” get preferential treatment when they import puppies and purebred dogs, sometimes even stolen from their owners yards! I have been to many many municipal hearings, county hearings and even our state capital to try to educate legislators about the hazards of knee-jerk, feel-good laws that actually end up harming dogs and the people who love and breed them. “Reading the comments here is very painful,” I remarked. “People don’t seem to understand or care about the consequences of such matters or their actions in supporting them.”

So in support of my own good health , I left that group of nutters.

Be careful what you wish for, you just might get it. 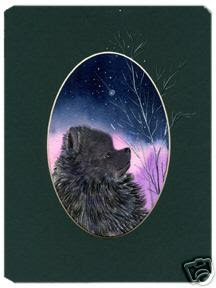