I've been absent from this blog for a while, going through some life changes, but still involved in fighting the good fight for protection of animal ownership. I read a couple of articles today about the threats to dog ownership. I have to shake my head in wonderment at how much we DON'T understand about the situation we are facing.

Both articles mention that we need to be on guard against the extremists who want to remove our rights. So far so good, right?

The animal rights nuts have constructed a "divide and conquer" strategy for us. They have coined the term "responsible breeder" and pitted the "responsible" against the "irresponsible." And we have happily fallen right into their web.

Now of course, there is no definition of what is "responsible" and what isn't when it comes to dog breeding, and there never could be.

Health and welfare standards are met? That should arguable be what we are going for, but of course, that's doesn't display our halos properly. We rush to point out that we register dogs, show dogs, health test dogs, breed only purebred dogs with consideration of generations of pedigrees, etc etc.

That's all fine and dandy, and great for those who want to do it, but who says any of that is necessary to preserve my RIGHT to breed my dog in the way I see fit? Who is anyone to judge who is more "responsible" than anybody else?? 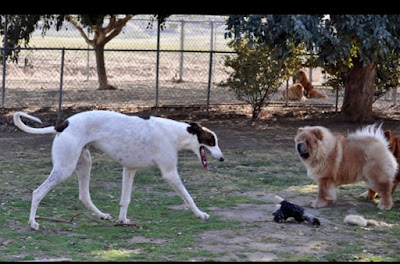 My goodness, we sure want to assure the animal rights folks that we are truly RESPONSIBLE.....although no one can reach that undefined benchmark, particularly when you are dealing with people who hate ALL breeders. The animal extremists will be happy to draw up guidelines to determine which responsible people can own and breed dogs. Aren't they awesome? And hey, we are happy to help put those nails in our own coffins.

But on to specifics of the articles I read. The first was an article in a recent "Dog News". The article starts out in a very accurate manner, talking about the "take no prisoners" attitudes of the animal rights groups; how you cannot negotiate with them, and how animal owners need to band together to tackle the threats head on. But then, the article takes a downhill turn. The author decries dogs in shelters, blaming the "problem" on "puppy mills" and "irresponsible breeders." Her only concern is that these darn IRRESPONSIBLE breeders might outlast those sainted RESPONSIBLE breeders.

She then wastes the last half of her article advising the reader about how to answer questions from the media. Has the media ever asked your opinion? No? Mine either. And I've been involved in dog law issues for 12 years now.

Next, we find a blog praising "responsible dog ownership and responsible breeders." Heck she even has a Facebook group with over 16,000 "likes." A situation in and of itself that tells us how much trouble we are in, if people are gullible enough to think that the "responsible breeders" in this world are anything other than those the Animal Rights crocodile eats last.

This author recently wrote a blog article asking "Where are Shelter Dogs Coming From?" While admitting that shelter numbers are at an all-time low, she claims this is due  primarily to the beneficial effects of the "adopt don't shop" campaigns. Yikes! Really? What about the fact that breeding has become practically forbidden everywhere? Ya think that might have had an effect? There is a mention of dogs imported for the rescue trade but no acknowledgement that this indicates a SHORTAGE of adoptable dogs. The author then asserts that there is a significant "problem" with dogs entering shelters, and it's caused by....you guessed it....IRRESPONSIBLE BREEDERS who are NOT breeding registered, purebred dogs, and to add to that, we can blame the IRRESPONSIBLE OWNERS of the world.

In case you didn't notice, I'm fed up with articles slinging around the "IRRESPONSIBLE" epithet. Why, there are animals in shelters! Lots of them. Yeah, rescues import them in droves from other countries, but gosh darn it, those "irresponsible" breeders and owners of the world! Why there should be no animals in shelters EVER! We need a world where EVERYONE is RESPONSIBLE!

Dogs get out of yards. They got old or injured and need to be put down. Maybe they just plain don't fit in the family, whatever! That's the JOB of the shelter, to take care of these situations. Not to run around looking for bogeymen and pearl-clutching about this TERRIBLE PROBLEM of animals in shelters.

The numbers of dogs entering shelters is MINISCULE compared to the human population in this country. This is borne out by the fact that shelters and rescues have to import dogs from other countries to support their sales base!

On another note, for many years public relations programs have been promoting the concept of taking your animal to the shelter, instead of just turning it loose if you find you can't keep your dog. Yes, people used to actually do that, thinking they would be taken in by some kind-hearted person.....and often they were. But more often, they weren't. And you thought that IRRESPONSIBLE people were a recent phenomenon!

So a public education campaign begged people to be RESPONSIBLE and bring their pet to the shelter where it could be re-homed or euthanized if necessary. And now, the public is being told it is IRRESPONSIBLE to take your dog to the animal shelter. If you doubt that they feel that way, just talk to any shelter worker. They literally FOAM with hatred at anyone who would actually bring them an animal!

Shelters exist for a reason; we have pets in our lives. We are paying them good money to care for, re-home and euthanize if necessary. The day that we no longer need shelters will be the day we no longer have pets. Is that the ultimate goal? I hope not, but I suspect we in the Dog Fancy will allow the Animal Wrongists of the world to decide that for us. They've gotten a great head start!

Posted by Liberty Belle at 4:29 PM