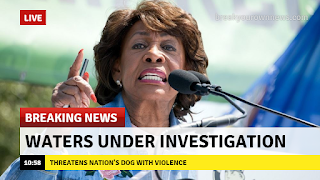 WATERS UNDER INVESTIGATION
Threatens Nation's Dogs on her 80th Birthday
In the wake of public death threats against the nation's dogs, animal right activists were successful this week in persuading Congress to open an investigation into Maxine Waters for animal abuse and terrorist threats against dogs. Waters celebrated her 80th birthday with her supporters, a big cake, and enough candles to burn down the rest of the State of California. The camera was rolling, but bless her heart, she was apparently clueless due to age-related sight and hearing impairment.
When asked what she wished for her birthday, she mused "I think dogs do not deserve to walk our streets; they are racist, they are sexist, they collude with Vladimir Putin. Dogs should be removed. Impound them! Impound them!"
"With this sort of inspiration, I could take these dogs out tonight." Waters exclaimed as she blew out the candles on her birthday cake amid the applause of her half-dozen remaining supporters. "I can't stand these dogs out everywhere you go. No Peace No Sleep! Let's make sure we show up wherever we have to show up. If you see any dog in a restaurant, in a department store, at a gasoline station, you get out and you create a crowd and you push back on them, and you tell them they're not welcome anymore, anywhere. We're gonna win this battle; God is on our side!
Impound forty five! Impound forty-five! Impound forty five!"
Representatives from PETA, alarmed at this obvious call for killing America's dogs, immediately invoked support of the public, soliciting letters and signature on petitions demanding Waters be investigated for inciting animal cruelty by the public. Only PETA, the Humane Society of the US, and local dog pounds should be allowed to kill dogs, they maintain. Dog Pound Workers Local 666 concurred, stating "This is an egregious attempt to deprive dog pounds of their sole source of income."
Animal Abuse is a felony punishable by jail time. Had Waters' rant been directed simply toward human targets, it would likely have avoided the scrutiny of Congress.
The President responded today in a Tweet "Maxine Waters, the leader of the Democratic Party, is a very low IQ individual. Her brainless senile threats against our great supporters are one thing, but when she threatens the nation's dogs, that absolutely crosses the Red Line. She will Make America Weak Again, Big League!"
Posted by Liberty Belle at 11:11 AM