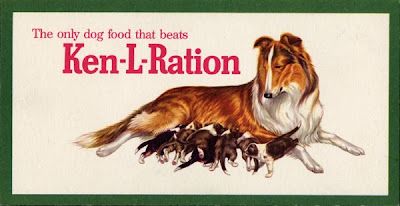 That's right, you heard me correctly. It's garbage.

"OK, fine!" you might say. "Dogs love to eat garbage....and they are even expert poop 'recyclers'! There's no food on the planet that can be a worse for them than poop, right? How bad can pet food garbage really be? Companies have to label it honestly, and they can't sell it if it isn't safe. Right?"

Wrong. As many thousands of owners of pets who were sickened and killed by their dog food will tell you. Dead Wrong.

The undisputed fact is that pet food is composed of the waste products from the food industry.

To make a pet food into that familiar crunchy hard kibble, it is necessary to use mostly dry ingredients. Dry foodstuffs like "meals" are used, along with large quantities of grain products, starches such as peas and potatoes, and dried plant proteins known as "glutens". Add to the mix other non-nutritious ingredients like beet pulp (fiber), rock phosphate for minerals (carrying with it a high load of incidental fluoride) and of course the nondescript "by-products". Some sort of preservative is needed for a long shelf life. These ingredients are then extruded under extreme high heat and pressure into the final kibble-foromed product. As we know from studies on people, overprocessed food lose much of their nutritional value. When you feed kibble, you certainly are not providing your pet with anything that could be fairly considered life-sustaining, much less healthful.
Canned food has the advantage of moistness, lack of chemical preservatives, and improved palatablity. However, the meat used in pet food whether it is canned or kibbled, is amost invariably what is referred to as "4D"..... from Dead, Diseased, Dying or Disabled animals. Yes, even most premium brands use 4D meats.
Another disturbing discovery is the use of rendered companion animals in the ingredient tagged as "meat meal". In the 1990s, some vets reported that dogs seemed to be developing a tolerance to pentobarbital, the drug used to euthanize them. Were they somehow ingesting low doses of pentobarbital? Pentobarbital is never used to kill animals who are destined to be food; it is only used to kill companion animals. Was pentobarbital in pet food? There would have only been one way it could have gotten there...by including the remains of euthanized pets in the meat meals that were produced by rendering plants

In 1998, the FDA did a random sampling of commercial pet foods to check for pentobarbital. Shockingly, 31 of the 37 brands tested had measurable amounts of the toxic drug. A followup study in 2000 found that the highest levels of pentobarbital were found in Ol' Roy, Kibbles and Bits, and Pet Gold. Other popular brands like Purina Pro Plan and Nutro Premium also tested positive for pentobarbital.
The uncomfortable fact is that companion animal carcasses have long been accepted by plants who specialize in "rendering". These carcasses join the dead, diseased livestock and road kill and are ground up, boiled at high temperatures and separated into fats and "meat". This "meat" is then further dried to produce a "meat meal." Meat meal is a major ingredient in many brands of commercial pet foods...and the Pentobartital evidence trail proves that companion animals have been a part of the mix...despite denials by the pet food companies.

So how can we avoid pet food made up of "4D" animals or recycled pets? You can look for a label that touts "human grade" meat, but there is no requirement and certainly no guarantee that "human grade" is ever actually used.

AAFCO is the industry group that certifies pet foods as "complete and balanced", usually with their stamp of approval right on the label! AAFCO is made up of individuals from the pet food industry. In effect, the industry polices itself. The fox is guarding the henhouse.

AAFCO certification means simply that the food in question lists a nutrient profile on the label that meets predetermined criteria for fat and protein content. Alternatively, a certification by AAFCO might mean that a feeding trial was done. To pass an AAFCO feeding trial, 6 out of 8 animals must complete a 26 week course of a steady diet of that particular diet without showing clinical or pathological signs of nutritional deficiency or excess. And 6 of the 8 must not lose over 15% of their initial starting weight. This is supposed to prove that the food is "complete and balanced"? Lack of weight loss is not exactly a ringing endorsement. In my estimation, AAFCO certification is completely worthless.

Think about it for about ten seconds. Dogs and cats are carnivores. How can a food based primarily on grains and carbs, with a bit of "4D" meat thrown into the mix, possibly supply them the necessary vital nutrition? Instead of fresh meats and vegetables, our pets are consuming the sweepings from granary floors, fibrous wastes from beet sugar production, and grains that have been warehoused so long that they are often rancid and infested with mites and mold. Proteins are derived in large part from vegetable sources like wheat, corn and soybeans....and dogs and cats cannot effectively digest plant-derived protein. The little meat included in commercial pet food is "rendered" from dead, diseased, dying and disabled animals.

But the proof is certainly in the pudding, as events in recent years have demonstrated. Recalls occur regularly. Most frightening are deaths due to contaminants like poisonous mold, which naturally grows on stored foodstuffs and produces toxic chemicals that are known as "aflatoxins". Equally horrifying were thousands of pet deaths due to eating food that included glutens tainted with melamine and cyanuric acid. Melamine and cyanuric acid are both high-nitrogen substances. They were illegally cut into glutens to increase the bulk of the product as a way to cut costs. Thankfully, the melamine problem seems to have abated with vigilant monitoring. However, aflatoxins remain an ongoing concern, with a recent recall by Kroger in over 10 states in December 2010 due to high levels of cancer-causing aflatoxins. Aflatoxins, produced by mold on foodstuffs, cause liver damage and liver cancer with long-term low dose exposure, or can kill outright at higher doses by inducing liver failure.

Even more damning evidence of the hypocrisy of the claims of "complete and balanced" pet food lies in the many recalls for vitamin or mineral insufficiencies or, conversely, toxic overdoses. We've seen recalls for lack of vitamin A...something that carnivores have traditionally depended on their meat and organ-based diet to provide. Plant-based beta carotene is useless to dogs and cats as they cannot convert it to vitamin A. Most recently, in 2009, thiamine deficiency in pet food caused deaths. There have been recalls for toxic vitamin D excesses and zinc overdoses.

Contamination with Salmonella, a bacteria that can cause diarrhea and illnes, and often cited as a concern with raw foods, actually has been the source of multiple recalls of dry kibbled pet foods. Apparently, when food is cooked until all microorganisms, both good and bad, are dead, you have just created a petri dish ripe for growing unchecked colonies of the first bacteria or fungus that happens to come in contact with that food. Oops!

The heavy overprocessing of meats used in pet foods degrades vital amino acids including taurine. This often causes actual taurine deficiency disease, manifested by cardiomyopathy. So lets cook the hell out of the food and then make a feeble attempt to add taurine back in? Wrong solution to the problem; taurine is abundant in fresh meats.
Most supplements, including the powdered taurine supplement that is added to pet foods, are exclusively sourced from China, leaving us with no safe haven when it comes to additives in our food supply. The glutens tainted with melamine and cyanuric acid were also sourced from China. I'm doubtful that this new world global economy is beneficial to either us or our pets.

Tainted ingredients are often found in different brands during recalls because dozens of different pet food brands are often made in the same production plant. Yes, even the premium brands are produced right alongside the grocery store brands by large "co-packers". Contaminants have been shared among various brands in recent recalls, premium foods as well as grocery store brands .

Transforming garbage into cash is a magical feat that has been perfected by these pet food industry giants. Is it any wonder that pet food companies are able to sponsor dog shows, and heavily lobby the veterinary schools with grants and freebies intended to push their products on society? You'll notice that most vets foolishly advise owners against feeding their pets fresh foods prepared at home.

Carnivores like dogs and cats rely on their traditional diet of fresh foods to keep them healthy and happy. Give your dog a bone. Give your dog some fresh ground beef, or maybe a chicken wing or back. Scramble him up an egg. Share your fish dinner with him. But please, say NO to commercial pet foods.

Sadly, many out there are so indoctrinated to commercial pet foods that they will remain skeptical of this information. "My pets are just fine and I've fed XXXXX brand for years!" they proclaim. This is comparable to playing a game of Russian Roulette with our pets' lives. And, sadly, for those who die, in hindsight the risk could easily have been avoided.

I rest much easier at night since I made the switch to frozen raw or sun-dried meats, and since I made the decision to share my freshly prepared ricotta cheese and egg casserole with my dogs.

And I cringe whenever I see that bag of "Ol' Roy" dog food ready for checkout in the cart ahead of me at WalMart!
More info:
http://www.homevet.com/petcare/foodbook.html
http://seespotlivelonger.com/seespotbook.html
Info on mycotoxins:
http://vetmed.iastate.edu/diagnostic-lab/diagnostic-services/diagnostic-sections/chemistry-/-toxicology/mycotoxins
And here is a recent Saturday Night Live spot that is more factual than they might realize! A fictional ad for "Mostly Garbage" dog food:
http://www.hulu.com/watch/99942/saturday-night-live-mostly-garbage-dog-food
Gosh that never gets old! I love that SNL spot!
Posted by Liberty Belle at 1:31 PM